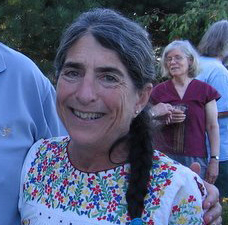 The need to connect soil and human health with social justice and fairness on the farm will be the focus of a keynote address by long-time organic farmer, agricultural justice advocate, and writer Elizabeth Henderson at the Ohio Ecological Food and Farm Association’s (OEFFA) 40th annual conference, Just Farming: The Path Before Us, this February in Dayton, Ohio.

In her Friday, February 15 keynote address, “Agrarian Justice: Creating a Food System Worth Sustaining,” Henderson will explore why we need to support fair pricing for farmers, instead of subsidizing corporate control of our food system. She’ll also explain why we need to unite family-scale farmers with other food workers and build a coalition powerful enough to bring to life a food system grounded in agroecology, health, freedom, justice, and equity.

“If we are honest, we have to admit that for the most part social relations in organic agriculture mimic those of the dominant industrial food system, and organic farmers, even farmers who sell direct in local markets, have a hard time making ends meet,” Henderson said. “By stretching towards fairness, organic can take its rightful place in the struggles for freedom and justice, for civil liberties for all. We will not reach the promised land of sustainability based on the environment and humane treatment of livestock alone. Farmers and farmworkers, the people who do the work of farming, must have justice.”

Henderson is a core leader behind the Agricultural Justice Project (AJP) and its Food Justice Certification label, working to create fairness for farmers and farmworkers.

“The basic premise of AJP is that supportive relations of mutual respect and cooperation among the people who grow and sell food will result in a triple win for farmers, food workers, and ultimately the people who eat the food,” she said.

Henderson is also a pioneer of the community supported agriculture (CSA) model. She co-founded the Genesee Valley Organic CSA in Rochester, NY in 1989, and later Peacework Farm in Newark, NY in 1998, one of the country’s longest running CSAs.

“For me, farming for a community of people whom I know well is very satisfying,” she told the Sustainable Agriculture Research and Education (SARE) program. “It’s not like shipping crates off somewhere, where I never see the customers. I know everyone, and I know most of their children.”

She co-authored the definitive work on CSA farming, Sharing the Harvest: A Citizen’s Guide to Community Supported Agriculture, and is honorary president of the international CSA network, Urgenci.

On Friday, February 15, Henderson will also lead a 90-minute workshop, “CSAs Around the World.”

“Around the planet there are many different ways of doing [CSA]. And that’s part of what’s so exciting, that CSA isn’t an orthodoxy, nobody certifies it, nobody dictates that you have to do it this way or that way. It’s a concept of the direct connection between a group of eaters and one or several pieces of land. And after that you can do it however you want,” she told the Farmer to Farmer podcast in 2015.

Deeply involved in the organic movement, Henderson is a founding member of the Northeast Organic Farming Association (NOFA) in Massachusetts. She has served on the Board of Directors for NOFA-New York and other farming organizations.

She is also co-author of Whole Farm Planning: Ecological Imperatives, Personal Values, and Low-Input Practices, and her writings on organic agriculture appear in Grist, The Natural Farmer, and other publications.

“We are honored to welcome Elizabeth to our 40th annual conference,” said OEFFA Program Director Renee Hunt. “As we reflect on how far we’ve come and the work ahead, her decades of experience and leadership in the organic movement and thoughtful ability to explore the themes of justice and diversity make her a perfect fit for helping to shape our work for the next 40 years.”

Henderson will speak as part of Ohio’s largest sustainable food and farm conference, which will run Thursday, February 14 through Saturday, February 16 at the Dayton Convention Center.

A limited number of scholarships are available to persons of color and beginning farmers, along with reduced rate volunteer spaces.

For more information about the conference, or to register, go to www.oeffa.org/conference2019.